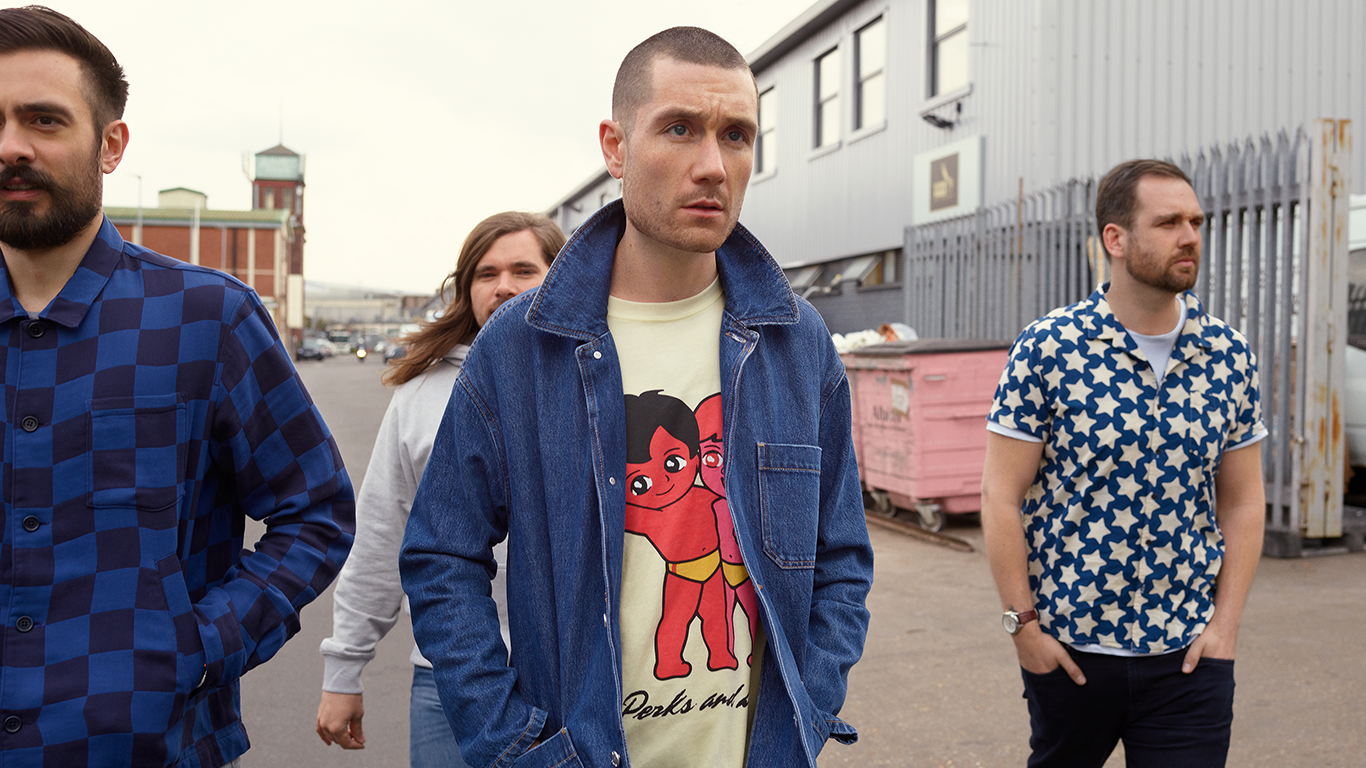 On June 14, Virgin Records will release Bastille’s new album, Doom Days. Made by Dan Smith with bandmates Kyle Simmons, Will Farquarson and Chris ‘Woody’ Wood, and producer Mark Crew, it sees the GRAMMY®-nominated, Brit-winning band stretch out and open up like never before.

Today, as the album pre-order launched, Bastille shared the lead single “Joy” – stream HERE – and announced its fall North American tour. The run will kick off on September 16 at The Met in Philadelphia and include shows at Hulu Theater at Madison Square Garden in New York City (September 24) and the Greek Theatre in Los Angeles (October 12).

Fans who pre-order Doom Days in digital format will instantly receive “Joy” plus the No. 1 Alternative hit “Quarter Past Midnight” and the title track, which premiered last week on Annie Mac’s BBC Radio 1 show. View the official video for “Doom Days” HERE.

Doom Days marks something of a shift in perception from its widely acclaimed predecessor, Wild World, which confronted the world and the actions of those in power. Recorded during the course of 2018 at the band’s South London studio, One Eyed Jack’s, the new album captures the need to temporarily switch off and escape.

Doom Days takes the listener on a big night out in search of distraction from the surrounding apocalypse; be that screaming along to the radio in the back of an Uber careering through the city (the electric “Quarter Past Midnight”), getting loved up in the company of good friends (“4AM”), a casual hook-up (“Another Place”) or the end-of-night longing to be with somebody (“Those Nights”). It revels in the bad decisions we make, both personally in our relationships and collectively on a macro scale (“Bad Decisions”), tells a relatable tale of being cornered into a deep discussion about the world’s problems when all you want to do is have a good time (“Million Pieces”), and wryly confronts modern anxieties, taking side-swipes at phone addiction, porn addiction, fake news and climate change denial (“Doom Days”).

The album celebrates real human connections and urges us to keep searching for those moments of elation. Being set over the course of one night allows the band to hold a mirror up to the world using personal, relatable situations. Doom Days ends waking on the kitchen floor with the healing sounds of euphoric new single “Joy,” which sees the demons of life’s hangovers dispelled by a simple phone call from someone special. “That glimmer of hope at the end of the album says everything,” says Dan Smith. “The smallest human gesture can pull you back from the brink.”

Doom Days bustles with energy and ideas. Its diverse sound takes in gospel, house music and R&B to name a few genres, and incorporates instrumentation inspired by Bastille’s acclaimed Re-Orchestrated tour. The album is at times introspective, intimate, political and also perhaps their most danceable yet, with tracks like “Million Pieces” and “Nocturnal Creatures” built on 90s breakbeats and U.K. garage hooks. Pop culture references, mood-setting dialogue clips and a rolling cast of backing vocalists add textures and voices to this night out.

Hailed by Rolling Stone as “Britpop’s new crown princes,” Bastille has sold over eight million adjusted albums and amassed more than 6.5 billion cumulative streams globally. The band was introduced internationally with the single “Pompeii,” which is now 6x Platinum in the U.S. alone. “Pompeii” and subsequent hits “Good Grief” (2016) and “Quarter Past Midnight” (2018) each topped the Mediabase Alternative chart in the States. Marshmello and Bastille’s hit single, “Happier,” has topped charts around the world, with cumulative streams exceeding two billion. Certified 2x Platinum in the U.S., “Happier” held the No. 1 position for three consecutive weeks on Billboard’s BDS and Mediabase/Top 40 Radio Airplay chart. It also topped Billboard‘s Alternative Songs and Dance/Electronic Streaming chart, among others.